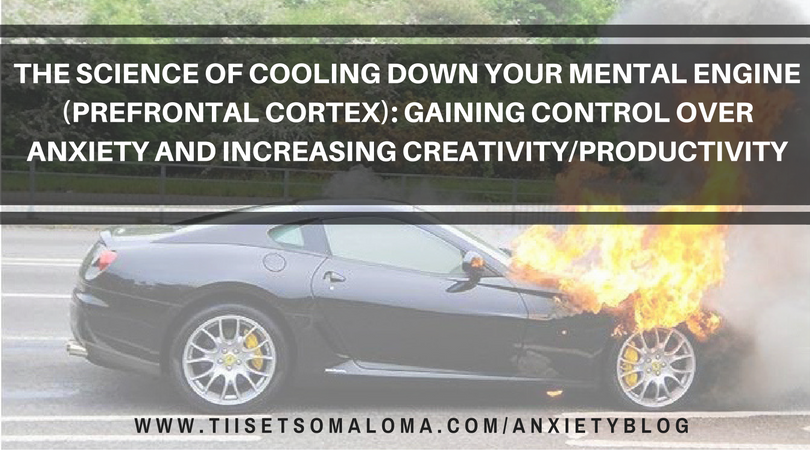 Sometimes I literally can feel my mind is overworked – like a car overheating – and frustration and desperation are taking control of my mental engine.

What if like the engine in a car we could turn our mind on and off to cool it down? Or like a computer we can refresh and clear our mental RAM?

Anxiety Defeats Creativity – Creativity Defeats Anxiety, this is the hypothesis and subtitle to my latest book The Anxious Entrepreneur.

In putting it together, there were many scientific theories I came across that could have been used but this was avoided altogether and has paved a way for this article.

The book dances around varying stories that could render an entrepreneur anxious and gives ways of defusing the anxiety through similar practices alluded to in this article. Its thrust is that when one hustles entrepreneurially, they will most certainly on numerous occasions hit points where they become overly anxious, thus unproductive and uncreative. To get out of that rut/zone, they have to unzone in order to tap into a creative zone (A space that would allow them to defeat anxiety). Meaning there is the anxious zone, and to abort it you’d have to go in an unwinding zone to move again into a creative/productive zone.

Again, in the past few days while randomly researching articles on surrealism, I came across a world of scientific studies that link very well to my view as expressed in the Anxious Entrepreneur, and this compelled me to look into the subject in depth.

A region of the brain called the prefrontal cortex or as it is commonly known the frontal lobe is said to be responsible for the executive control of all brain activity and other brain regions. It is responsible for perception – and how we rationalize and make sense of things.

Scientifically creativity and productivity versus anxiety in all its forms (depression and stress) have a lot to do with the amount of function assumed by the prefrontal cortex.

When the prefrontal cortex relaxes

One study titled ‘Neural Substrates of Spontaneous Musical Performance: An fMRI Study of Jazz Improvisation,’ by Charles Limb and Allen Braun scanned the brains of jazz pianists playing a written musical piece and again while playing the improvisational piece. The comparative neuroimaging study found that the artists’ brain activity mellowed down and decreased while playing the improvisational piece.

Those without stress but a free mind

In another article Arthur P. Shimamura Ph.D., author of ‘Get SMART! Five Steps Toward a Healthy Brain’ and former professor of psychology and faculty member of the Helen Wills Neuroscience Institute, mentioned that: “patients with extensive damage to the prefrontal cortex exhibit a failure to inhibit stray thoughts and feelings. Such patients are distractible, lack attentional focus, and are driven by whatever motivates them at the moment (often without “moral preoccupation”).”

To have no moral preoccupation is, of course, a bad thing. The statement refers to ‘patients with extensive damage to the prefrontal cortex.’ Everyone else has to be morally astute. This is only to illustrate that these patient’s minds are disengaged thus do not strain over their actions.

The link between anxiety, depression, creativity and prefrontal cortex?

The medial prefrontal cortex has been found to be the region of the brain that is linked with self-consciousness and self-related mental processes.

A neuroimaging study has found that with depressed people, the medial prefrontal cortex exerts more control over other parts of the brain involved with self-appraisal than it does in people without depression.”Said Christopher G. Davey, a co-author of the study.

It could be said that depressed people spend time thinking, over-thinking and appraising themselves negatively. A lot of us can relate and this is caused through focused prefrontal cortex (anterior mind) activity. It favours decreased creativity and productivity in this state.

They do not give their minds a break, e.g. by doing surreal hobbies like the jazz musicians above do when playing an improvisational piece.

Surreal hobbies could be taking a walk, meditating, running or hanging out with friends. It could be any activity that lets you unwind. For me it is running, music, friends, clubs, and movies.

In the book ‘Get SMART! Five Steps Toward a Healthy Brain,’ Dr Arthur P. Shimamura advocates five things for a healthy brain, which are: get social, get moving, get artistic, get thinking and get responsive.

Neuroscientists at the University of Pittsburgh did a study entitled ‘Anxiety Evokes Hypofrontality and Disrupts Rule-Relevant Encoding by Dorsomedial Prefrontal Cortex Neurons.’ They found that anxiety has a detrimental disruption on the prefrontal cortex and hinders flexible decision making.

We can thus deduce from the study that anxiety does impair decision making.

In my observation, as in my book, anxiety courses frustration and desperation. As an entrepreneur, this has caused me to make approaches that don’t consider value-add for those I am proposing to but only to meet my immediate desperations (money and wins).

We therefore cannot think and decide effectively when we are under the strain of anxiety.

How to get creative and productive

Productivity implies being logical in approaching and achieving intended goals. But to be productive, one needs creative ideas to work on productively. For instance, in writing this article, I needed to be creative in how logical it will read. Productivity is like a logical cultivation of creative ideas to produce favourable outcomes. Enough of the semantics.  Creativity and productivity mean more less the same thing. They interrelate and depend on each other.

So where does creativity come from?

Arne Dietrich is the author of ‘How Creativity Happens in The Brain’ and an Associate Professor of Psychology and Chair of the Department of Social and Behavioral Sciences at the American University of Beirut. He has a model of creativity, which gives four types of creativity as:

Experience and exposure play a huge part in creativity, in that you can always take ideas from them and fuse them together into solutions. A spontaneous idea can hit you and you then fuse it with an old exposure/ideas/experience to make a newer solution.

There is definitely a mixture of controlled cognition/thought (prefrontal cortex functioning) and the subconscious in order to come up with creative ideas – that then need to be cultivated productively. It could be more or less of the latter or more or less of the former.

In closing (but open ended)

As in ‘The Anxious Entrepreneur,’ these all suggest and affirms that creativity, joy, and productivity is depended and linked with deactivating executive control of the brain (the prefrontal cortex) and stepping into a surreal space.

We therefore need to unzone consistently often to cool our mental engine, gain peace of mind and thus refresh our creativity and become productive.

You can purchase a copy of The Anxious Entrepreneur book on Amazon, Apple iBookstore and Kobo.co.za. South Africans can order print copies here www.tiisetsomaloma.co.za/anxiousbook.