This post is either borderline satire or truth, I could not decide at the time of writing. All I know is that it is my sign of appreciation.

Doctors, mechanics, professors, the unemployed, politicians; whoever they are – if they are black and South African, Mgarimbe’s ‘Sister Bethina’ makes their world go steady-wild and crazy. Like LSD did to the youth of the 70s, but in this 4 plus minute song. Like how white people go crazy when Earth Wind & Fire’s ‘September’ plays – only rhythmically, ghostly and crazier.

It heightens our ratchet consciousness. It is our endorphin releaser. It cuts across professional prestige.

Men and women of different ages and social standing love it. Kids not yet born will adore it. 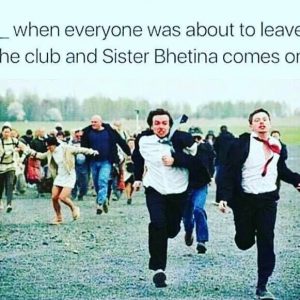 The song is so well layered. The inflection and timing of each lyric raises you more into its festivity.

The ‘hibiri’ is like a wake-the-f-up slap on your consciousness to enjoy more.

I cannot readily point the theme of the song, but one popular point that comes out is the anticipation that at least one girl (or boy for that matter) will loosen their sexual guard. As to how a Sister called Bethina plays into the picture, I do not know.

All I know is the song came to be when Mgarimbe and Jabu (the DJ) did MC’ing and hyping work at a Hilbrow strip club. I think it is called The Summit; I am from Limpopo I do not know Jozi that well.

The beat is a slowed down sample of Aliyah and Timberland ‘try again’. I guess whenever the beat dropped, they would rap and hype over it. People loved it, then it was made a song and it became an uncontrollable hit.

They used mixture of The Beatles method.

The Beatles used to be a cover band, later changed to writing their own songs as competition in the sing-other-people-songs market toughened.

Because they sang other people’s songs for some time, they learned frames of deliveries and lines to which people outstandingly respond. When they started making their own music, this knowledge came in very handy.

Mgarimbe and Jabu must have sung different variations of Sister Bethina numerous times, with vast lyrics and lines. They noticed what got the crowd going more and cut out what did less – in a strip club.

On recording day, they used the most well received lines and lyrics. It became a hit.

Before I leave, there is a national debate going on that Babes Wodumo’s (ft Mampintsha) ‘wololo’ takes on ‘sister bethina’ as a national monumental anthem of happiness and craze. Do you agree?

Outro: The world Summit held at Europa Hotel was a success regardless of the Malasha of damage. The hotel has one Teaze(rs) of The Grand view.