This is an excerpt from my book ‘Understanding the 4th Industrial Revolution & Innovation Easily.’ It is available on Amazon, in South African bookstores, and on my website.

It does not mean, however, that other economical revolutions did not happen in South Africa, and the rest of Africa, in the past; but I will get to this later.

Because the collective areas of land that now form South Africa were colonised in stages, starting in the Cape by the Dutch and later taken over by the British, I will call it, ‘Project Colonise South Africa.’ Industrial Revolution dates are estimates – i.e. the beginning, duration and end of any given industrial revolution is marked by when its sequel is named and recognised – and they serve to identify eras of significant revolutionary innovations in the world. Note that, although different researchers have different dates, they do not vary significantly.

* The ‘c.’ before the year means approximately.

It is unclear as to exactly when in the 2000’s we can pinpoint the start of the Fourth Industrial Revolution but ‘we are in it’, as I’d jokingly say.

From what I can tell, the first articles about the Fourth Industrial Revolution began to appear on Google in about 2016; but I speak under correction on this.

Nevertheless, as you continue to read I will expand on what a revolution is, within my context, and it should become clearer as to why we have graduated to a new Industrial Revolution. 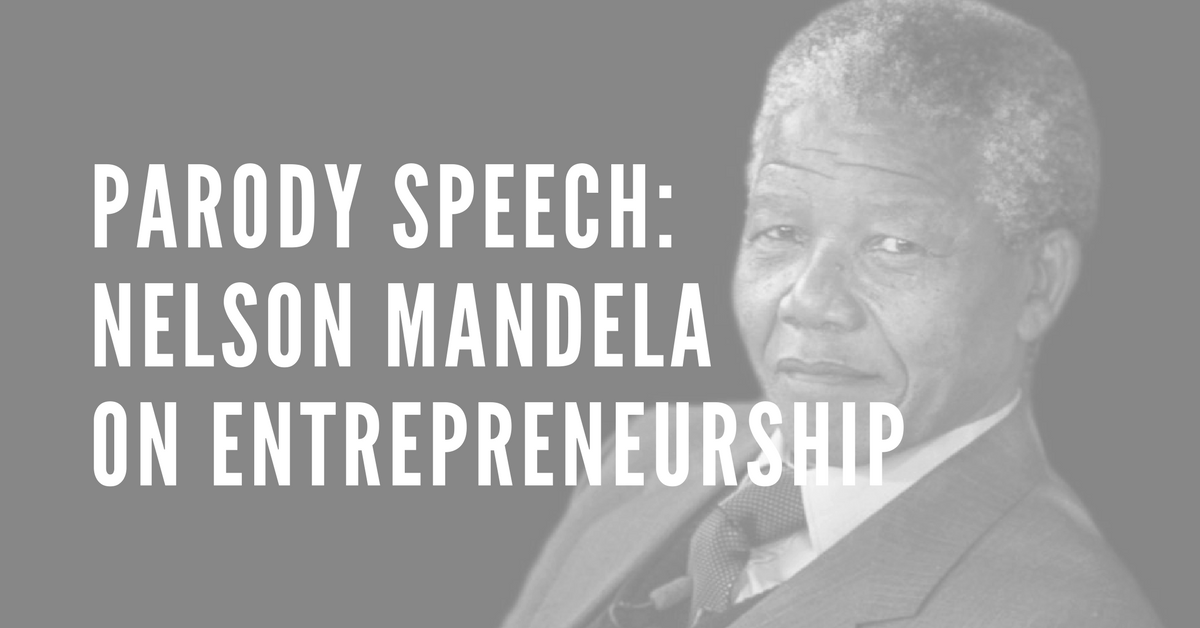 In the beginning things were hard, I only had 2 suits. So, don’t laugh at the young entrepreneur you see at conferences wearing the same suit over and over again.

Here is some little advice. Buy a black suit if it will be the only one for a long time. Any other colour will give you off – that you wear the same suit all the time. END_OF_DOCUMENT_TOKEN_TO_BE_REPLACED

I’m sure most of you saw an article on Mandela’s birthday; titled “Mandela sold blacks out” via News24. I could feel the pain the fella was spilling into the post. Either you sympathized with it; were disgusted by it or felt neutral. Nonetheless it pointed out real points that have a fundamental bearing on the South African economy.

The CODESA negotiations had a number of outcomes which of course directed South Africa’s political and economic future.

Land was to be redistributed per the model known as willing buyer willing seller, private property was to be constitutionally protected, new bill of rights and the South African Reserve Bank remained in private hands.

The Convention of Democratic South Africa produced what it produced and at the same time didn’t produce some aspirations. In many senses our struggle heroes tried their best. Kudos to them! END_OF_DOCUMENT_TOKEN_TO_BE_REPLACED

17 years into the so called democracy; a lot has been done but more is still not done. Poverty and unemployment are scourges that still thug our society.

Of recent was the successful economic freedom march which travelled from Johannesburg CBD, to Sandton then finally Pretoria. A distance of approximately 60km travelled over 24 hours straight. Young man and women; mostly unemployed; took part in the march. END_OF_DOCUMENT_TOKEN_TO_BE_REPLACED

This is a continuation of the previous article titled “Colonialism/Apartheid – a high interest, long term and lucrative investment for the west”.

Why do you think South Africa is a developing country? Why do you think we do not have our own Nike, Iphone, Mercedes etc? Why don’t we have mighty brands like these walking the world?

Here is a silly question: why are white South Africans wealthier than the blacks?

I’m not bitter. In fact I’m up the challenge to transform Africa for the better and for everyone. My senses, emotions and actions are allergic to caring out racism. Still I don’t hate or wish pain upon any racist.

Some may not agree that colonialism was wealth focused. But no one can argue that it suppressed one and made the other wealthier.

I’m hoping at this point we can agree that any challenges in Africa can be conquered with the tool economics (commerce).

Let me get down on it; that is explaining this concept I call de-colonialism. Colonization was international. Apartheid was national. To me they are all the same.

Colonization made the colonizer’s image (products) cooler to buy into. So you don’t hate local products. Colonization embedded such hate into you. That is why we trust Nike or Apple products to any other that would come from us. Excuse the impositions; it’s an easy and quick method of sharing ideas.

I hope you are with me. Colonize them yesterday and sell them your image today. That way you get to pioneer innovation or rather civilization whilst they are picking up the pieces.

What do you think was happening in the western world during the struggle? Entrepreneurs where hard at work; as they should; doing their thing. They were gaining momentum in business; being inventive and innovative.

When the doors of opportunity (realization of democracy) where opened in South Africa (and else where); they where better prepared to share their great inventions and innovations with our world.

For (blacks) Africans, it was between being an entrepreneur, the laws which suppressed free enterprising for blacks, fighting for democracy and other social restrictions coloured by apartheid. It must have been impossible; too hard. Although fellas like Richard Maponya really fought a good fight.

Poverty, lack of jobs etc; can be solved through commerce that is sustained and owned by South Africans. I actually think reconciliation is impossible (actually silly) without progressive and just economic themes.

De-colonization requires practicing self love. Love thy country and its aspirations. Again apologies for the impositions in the statements. It’s a quick and easy way of sharing ideas.

An average person today spends has or spent their greater time at work or school if not unemployed. Therefore de-colonization should take place through education and economic activities; since we spend greater time there.

SO. If colonisation and apartheid robbed us of the opportunity to compete in the international arena and gain wealth like legacy; don’t you think we owe it to ourselves to give us that opportunity to catch up?

For any equality or rather economic just and prosperity to take shape; we have to take radical actions. We need to afford ourselves that opportunity to build wealth like legacies. With foreign investment; as we seem to rely on it greatly; non South Africans will continue owning our prosperity and legacy.

The basis of any economy is the consumer. It’s the consumer’s money that makes commerce possible. Where the consumer spends his money is where prosperity falls. So if we as South African consumers want our economy to flourish; we need to spend our demand on us; I’m talking about local products. A general sense of tolerance towards local products ha to be awakened.

Drastic and radical actions have to be taken to improve and propel our society. If the Madela, Sobukwe and Sisulu era scarified greatly for today; we as well have to sacrifice something for tomorrow. Petty sacrifices; like buying local products.

As an outro let me case to you what supporting local products does. E.g. Say the local clothing industry booms by R5 million; in many senses the R5 million will be spend like this: clothing companies are going to rent bigger offices; higher more cleaners, more security, petrol, IT, CMT, fabric, staff etc.

Over next the few paragraphs I will highlight and as well explain why colonialism was a long term investment for the colonisers (the west). And a good one I must say. The interests still show; of course any investor will protect their investment.

FYI: the mighty west did try to invest in Asia though colonialism tactics; Unlike Africa that attempt was not that successful. END_OF_DOCUMENT_TOKEN_TO_BE_REPLACED

‘The less fortunate’; is a phrase often used referring the poor. To me unfortunate is an unplanned circumstance. While the poor in this country; are so because of the previously employed strategies of Apartheid and colonialism.

We (blacks) chose reconciliation without justice; which meant; starting from scratch. We mostly were uneducated; unemployed and unskilled. We are where now free participants in the South African economy.